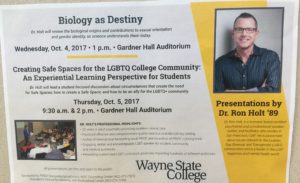 This presentation was part of a diversity lecture series sponsored by PRIDE, WSC Counseling Center, President’s Council for Diversity, and the Multicultural Center.

The presentation consisted of reviewing LGBT student case scenarios through small breakout groups, which allowed an experiential learning perspective. After discussing a particular case as a smaller group, the group would present the case to the whole audience with Dr. Holt as the facilitator.

The audience consisted of students, resident assistants/housing staff, and the public.

I highly recommend people hear Dr. Holt speak. It made are feel more open minded that I was before. I learned good strategies to make the LGBT community feel more accepted.- 20 y/o F

This talk was very good! The work you are doing is changing lives. I learned how to let my residents know I am a LGBT ally!- 19 y/o M

I took away a lot of good ideas for my RA job and later in life when I am teaching in a school.- 2o y/o F

I will carry the examples and role playing with me and always try to use them in any similar real life situations I encounter. I want to be the best ally I can be. I love getting updated on the current research and stats. As an aspiring psychologist, the mental health stats are super important to me.- 22 y/o F

I learned a lot today and became more aware of LGBTQ. I learned what trans have to deal with who can suffer many mental health issues.- 18 y/o F

I liked the seminar. It will influence me by talking to students/people that are LGBT and listening to them when they are in need. All the information was important, but the most important thing is to be there and if they come out to you to thank them and don’t be negative.- 18 y/o F

My group is covering sexual orientation and I convinced my instructor to check out your talk. Thank you for speaking and informing people. I learned my orientation has one of the highest rates for suicidal thoughts (bi). It makes sense. – 34 y/o F

I feel more comfortable and I feel like I will be able to handle situations much better. I learned to just be supportive and show them that you care and they have an ally and even more important a friend.- 20 y/o M

It made me realize that other people have the same problems as myself. I learned how to make LGBT people feel safe.- 18 y/o M

It was cool that it was interactive and we could talk with other people about the topic of LGBTQ. I learned to be open to anyone and allow other people someone they can trust to talk to about coming out or to just talk about something that is bothering them about their sexual orientation.- 18 y/o F

It was very helpful. I’ll support anyone that comes out because that is a big step for them. Be open to anyone that wants to talk about it.- 18 y/o F

Very informational. Thank you for doing this. I learned how to handle issues discussed as an RA. – 23 y/o F

My best friends are both bi and sometimes I don’t understand what they’re talking about. I realize it’s just better for me to ask questions. I learned to be accepting and be openly supportive.-18 y/o F

I will start trying to let people know that I’m a safe person. The smallest actions can make the biggest differences.- 20 y/o F

Dr. Holt’s genuine in his presentation. I learned being open and accepting to all sexualities.- 70 y/o F

I am already an ally but this presentation asserted how important LGBTQ+ issues are to fight for and support. I learned having a GSA on campus lowers suicide ideations. Need to support campus GSA.- 21 y/o F

Great talk. Enjoyed your presentation. I have heard different stats on suicide. I learned about trans pronouns.- 19 y/o M

Very good talk. Very educational. I learned how to be there for someone who is coming out.- 18 y/o F

I thought this was a good learning activity. I will be more accepting of this community.- 18 y/o F

Good talk- learned new things. I will be there for people who are just coming out.- 18 y/o F

I will be more open about people in the LGBT group. I will provide support. I learned ways to help friends/peers that are coming out and need support.- 20 y/o F

I have a better understanding of things. I learned when you say something that can be offensive or is offensive, the best thing you can say is ‘sorry’.- 19 y/o F

This talk influenced me to stand up and be there for the LGBTQ community. – 22 y/o M

I found this talk was very interesting. I got a different understanding of the same genders using the same restroom. I’ll be more understanding. I learned that trans, gays, and lesbians are just people and we need to give them a chance.- 18 y/o F

This talk makes me even more aware of my surroundings. I learned to apologize if I call someone the wrong pronoun.- 20 y/o F

I thought the overall process was very unique. I really learned a lot about the LGBTQ community and how to be an ally for others. I learned how to respond to someone coming out to you and how to be ally.- 21 y/o F

I learned how to make sure people know I’m a safe source and a reliable person for anybody to approach me.- 20 y/o F

I learned that RA’s have had training – this was a good reinforcement of acceptance and support of LGBT students. Need to train staff at WSC, create safe areas and have bathroom signage.- F

This presentation made me want to be a bigger advocate for the PRIDE community. I learned to be accepting and supportive of others.- 18 y/o F

I learned more about the stress for the LGBTQ community. They need to know they can be safe. I learned how to make the environment more safe.- 22 y/o F

This talk made me feel very comfortable. I learned how to confront situations.- 21 y/o F

I enjoyed the discussion style. I learned how others feel.- 19 y/o F

I learned to be accepting and open to other people’s decisions.- 18 y/o F

This helped me learn about some of the struggles that trans and others go through. I got to see a situation through different eyes. I learned how to promote safe places and about pronouns.- 19 y/o M

This educated me on topics I still don’t know a lot about. I learned to never force a coming out conversation.- 19 y/o F

I can’t agree with the scenarios because I don’t believe in this. I learned nothing.- 18 y/o F

He is the co-author of PRIDE: You Can’t Heal If You’re Hiding from Yourself as well as many adult coloring books found on Amazon.

Ron is passionate about issues relevant to the Lesbian, Gay, Bisexual, Trans, and Queer/Questioning (LGBTQ) communities and is a leader in the LGBTQ happiness and mental health world.

He inspires people with breakthrough methods to help them achieve greater personal fulfillment. His style is approachable and relatable, and he is dedicated to helping people live more empowered and joy-filled lives.