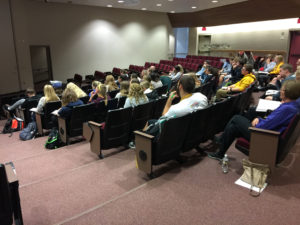 Gay Sexuality: Biology as a Destiny

The audience consisted of students, faculty, and community members.

The Biology as a Destiny presentation helped audience members compare and contrast the definitions of sexual orientation and sexual behavior; describe the spectrum of sexuality in the general population; identify that sexual orientation is not a choice; describe how genetics plays a role in male homosexuality; list the current biological theories on causation of male homosexuality; and identify neuroanatomical differences between homosexual and heterosexual men.

As someone who is pursuing a doctoral degree in counseling psychology – wanting to focus my research on relationships, sexuality, the LGBTQ+ community and gender – Ron Holt’s talks are always beneficial to me. I am forever impressed by him. I loved learning about all the various research studies. I am constantly searching for more research to immerse myself in. – 22 y/o F

Love all the new areas of comparison that epigenetics opens up for study! My gender nonconforming 2 and 3 year olds will know their gender identity.Their sexual orientation is yet to be determined! – 37 y/o F

Loved this! I will think about nature vs nurture a little deeper, but I’ve always leaned towards nature. I didn’t know a lot about twin studies. Very cool. I learned proper terminology and I really appreciate that. – 18 y/o F

Very interesting topic and I am definitely influenced by the research provided. It will influence me to be more educated about homosexuality and bisexuality.- 18 y/o M

I am so glad someone has brought a spotlight on how it is NOT a choice! Thank you so much for supporting LGBTQs! – 18 y/o F

It was very eye opening and nice to learn more about a hot topic. I learned the older brother theory.- 19 y/o F

I liked this talk. This is a topic that I think is interesting and more people need to know about this. Thank you for coming in to speak with us today. – 18 y/o F

Distinction between orientation vs. behavior is something the public needs to be aware of. Appreciated the reinforcement in presentation that orientation is NOT a choice. Twin studies lean towards nature. Orientation multifactorial. – 21 y/o M

Learned sexual orientation can be different than sexual behavior. Also having multiple boys will increase the chance of being gay. – 19 y/o F

This was a very influential talk and I learned a lot of new ideas to why someone is homosexual or bisexual. Epigenetics was also a very new talk for me. Thank you for coming today! – 18 y/o F

Just realizing there are a lot more factors determining sexuality. It isn’t a choice. It also isn’t based on how they were raised. – 18 y/o M

I know so much more now about the factors/causes that go into being homosexual. Sexual orientation can never be changed. – 18 y/o M

Triggered some interest in doing research about the idea of gay being genetic — many questions. I learned what the mother’s body does after having multiple boys. I didn’t know there could be a difference between sexual orientation vs. behavior. – 19 y/o F

Sexual orientation is not a choice. Behavior is what you can choose. You cannot help what you feel. – 21 y/o F

It was a really good and informative talk, which I’m pretty sure will influence many people to have an open mind and more understanding of this concept. Science evolves and there is always new things to learn and concepts to change. – 20 y/o F

I knew it was biological, but now I want to look into the theories behind the biological component of sexuality. I learned sexuality can be determined very early in development. – 20 y/o F

The talk helped me see both sides of the argument. I learned the cases of both nature and nurture. – 21 y/o M

We still don’t know why we are who we are. Orientation and identity comes from within not environment. – 58 y/o F

This talk will help me not judge these people as much even though I tried not to do so before. I learned the difference between sexual orientation and sexual behavior. – 18 y/o F

Assist to promote SO through language and understanding. Epigenome – very interesting. Enjoyed the discourse at the end. We need this on our campus more. – 37 y/o F

I’ve learned more about the different sexualities and what attracts them. Nobody chooses their sexual orientation. – 19 y/o M

I now know that pansexuality is. This does not personally effect my life much, but now I know. Sexuality is not a choice. – 18 y/o F

Very good as always. Thanks for all your love to WSC. – M

Good information and nothing is wrong with question #3. If a child wants to be female and if they prefer to be addressed as female, then that’s fine. I learned about sexual orientation vs behavior. – 22 y/o F

It really helped me understand the differences in the different sexual orientations and behaviors. I learned what trans means. – 18 y/o F

It made me disagree more. Children need to be raised right.- 18 y/o

I personally do not believe in a gay gene or inheriting gayness. I believe it comes from thoughts because of your surroundings.- 19 y/o M

I was forced to be here. Gay gene doesn’t exist. If it did then it would have died out or be very limited. There are only 2 genders – male or female. – 18 y/o M

This talk showed that there is no real science behind the gender theory….After this talk, seeing differences from the normality or majority in sexuality seems more like a disorder. As with all disorders, we should be accepting of the person for all people have dignity. – 19 y/o M

Dr. Holt’s comments: The information presented in this talk points to a multifactorial causation of male homosexuality: A combination of genes, hormones, male birth order and epigenetics. We all fall on a gender spectrum with most of us identifying as either male or female. Anatomy does not define our gender identity.

He is the co-author of PRIDE: You Can’t Heal If You’re Hiding from Yourself as well as many adult coloring books found on Amazon.

Ron is passionate about issues relevant to the Lesbian, Gay, Bisexual, Trans, and Queer/Questioning (LGBTQ) communities and is a leader in the LGBTQ happiness and mental health world.

He inspires people with breakthrough methods to help them achieve greater personal fulfillment. His style is approachable and relatable, and he is dedicated to helping people live more empowered and joy-filled lives.